China in Our Time 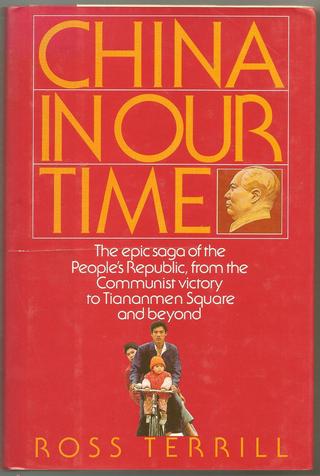 "China in Our Time provides an absorbing history of the Middle Kingdom's traumatic last three decades... a rich autobiographical account of an intellectual's wrestling with the most populous country in the world... this is an elegantly written, engaging and knowledgeable book, which reads as if one were having a casual dinner conversation with the author at a corner table of a Beijing duck house."
- Nicholas Kristof in New York Times Book Review 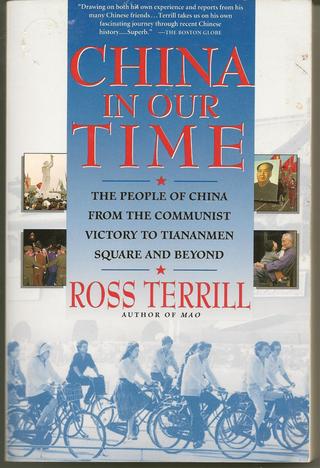 This uncommonly fine book is personal history.. His story is not only a vivid account of the darker realities roiling beneath Chinese Communist rhetoric. It is also the story of [Terrill]'s own growing perception of the tyranny that Maoism represented...
- Richard Marius in Harvard Magazine

China in Our Time is an elegantly written book that is both personal and incisive.
- Seattle Times

China in Our Time provides an absorbing history of the Middle Kingdom's traumatic last three decades...For anyone wishing to learn more about the odyssey and plight over the last few decades of one-fifth of humanity, this is a terrific introduction.
- Nicholas Kristof, New York Times Book Review

In this splendid work, Ross Terrill bas brilliantly captured the complexities of modern China, the leaders, the people, and the events better than anyone has ever done.
- Doris Kearns Goodwin

China in Our Time is an incisive and timely depiction of China's evolution over the last quarter century, illuminated by Ross Terrill's many journeys through China and his considerable literary talent..” - Daniel Yergin, author of The Prize

A riveting account...of four decades of Communist rule. Balanced, thoughtful, and impressive for Terrill's candid criticism of his own approach and for his mastery of the telling detail.
- Kirkus Reviews

This gripping account of a 28-year pilgrimage in search of China is beautifully written, deeply honest, and rich in insights. Ross Terrill's experiences mesh with China's convulsions so magically that the tangled story of Confucian Leninism is something we can all, thanks to his artist's eye and unmistakable authority, begin to grasp.
- James C. Thomson Jr., former White House aide

Ross Terrill has a rare ability to "seize the hour," to place himself in China at the moments of high drama. He arrived in Beijing a few hours before Tiananmen and his account of the bloody turmoil is one of the best and most dramatic. He got into China in 1964, well before the Cultural Revolution and beat Nixon and Kissinger to Beijing by more than a year. His memoir provides an attractive series of vignettes which illuminates China's recent past.
- Harrison Salisbury, author of The New Emperors

“I can think of no better source to prepare us to understand the next chapter in the long, gyrating saga of the Middle Kingdom.
- Chicago Tribune


"Ross Terrill first visited China in 1964 when it was still terra incognito to almost all Americans, and he he was there 25 years later, on June 4, 1989, when the Tiananmen massacre took place. In between he acted as an informal channel between the Chinese and two governments, and also produced some of the most important Western writing on China. In this perceptive, thoughtful, and sometimes moving book, he sums up his own experiences and those of China. Anyone who is interested in the Middle Kingdom will want to read China in Our Time.
- Richard Holbrooke, Former Assistant Secretary of State for East Asian and Pacific Affairs

"As an exiled student from Tiananmen Square, I think Ross Terrill has done a great job of weaving historical fact with personalized descriptions that provide unique insight into China's dramatic contemporary history and the recent Tiananmen tragedy. China in Our Time is a hard book to put down. For those who desire a more intimate view of China, it cannot be missed.
- Shen Tong, author of Almost a Revolution


"[Terrill]'s qualities as acute observer and graceful writer are undiminished. His new book provides a very good sense of where China is now, and even some sense of where it may be going...His concluding chapters, which deal with Tiananmen, are absolutely wonderful, vividly capturing the drama of the events, and somehow eliciting fresh outrage as they are read. They are perhaps the best short account we have. The voices of ordinary people...are heard here on nearly every page."
- Arthur Waldron in The National Interest

"A first-rate piece of work on a fascinating subject."
- Henry Kissinger

"Engaging...Throughout the years of turmoil in Mao's China, Terrill had a ringside seat...One ends the book grateful to have watched the Chinese political opera with a seasoned buff who from time to time slips away and reappears on stage."
- Christian Science Monitor

"Terrill...combines a journalist's eye for detail with solid academic training. He can thus tell an entrancing story and make a compelling case. China in Our Time is part historical narrative and part personal memoir. Terrill's experiences in China mesh beautifully with many of the most significant events in the history of the People's Republic. [His] eyewitness account of the June 4 massacre is one of the most powerful and horrifying records of the event I have ever read or expect to see. The most impressive feature of Terrill's book is the human face it gives to China.
With the same steady hand and personal touch that produced his highly acclaimed biographies of Mao and Mao's infamous wife, Jiang Qing, Terrill provides sketches of less exalted but no less interesting people...
- Houston Chronicle

"In this book Terrill masterfully tells the story of the forty-year history of the People's Republic, weaving into it his personal biography and evolution as a China specialist. In many ways China in Our Time is a supplementary, if not a corrective history of the many China books Terrill has written in the last two decades. His review of the last forty years from the perspective of 1992 is illuminating, especially to those who have read his earlier volumes.
- China News Update

“Terrill’s account of the [1989] Tiananmen Square massacre is the finest, I think, that we have in English, as well as the best dozen pages Terrill has ever written.
- Free China Review

"A riveting account...Balanced, thoughtful, and
impressive for Terrill's mastery of the telling
detail"
- Kirkus Reviews 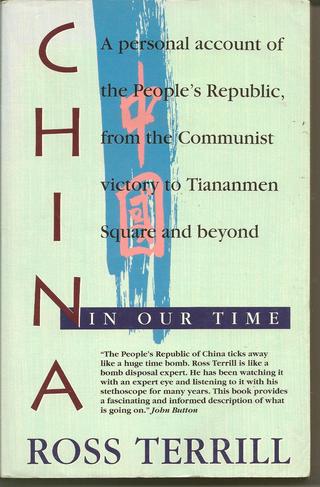